The Affordable Drone with Amazing Features

The drone takes premium quality pictures and videos and is easy to fly. The drone can connect to your phone using Wi-Fi signals that allow you to stream videos and photos directly to your smartphone. The Promark P70-VR Drone reviews will guide you when selecting the drone. 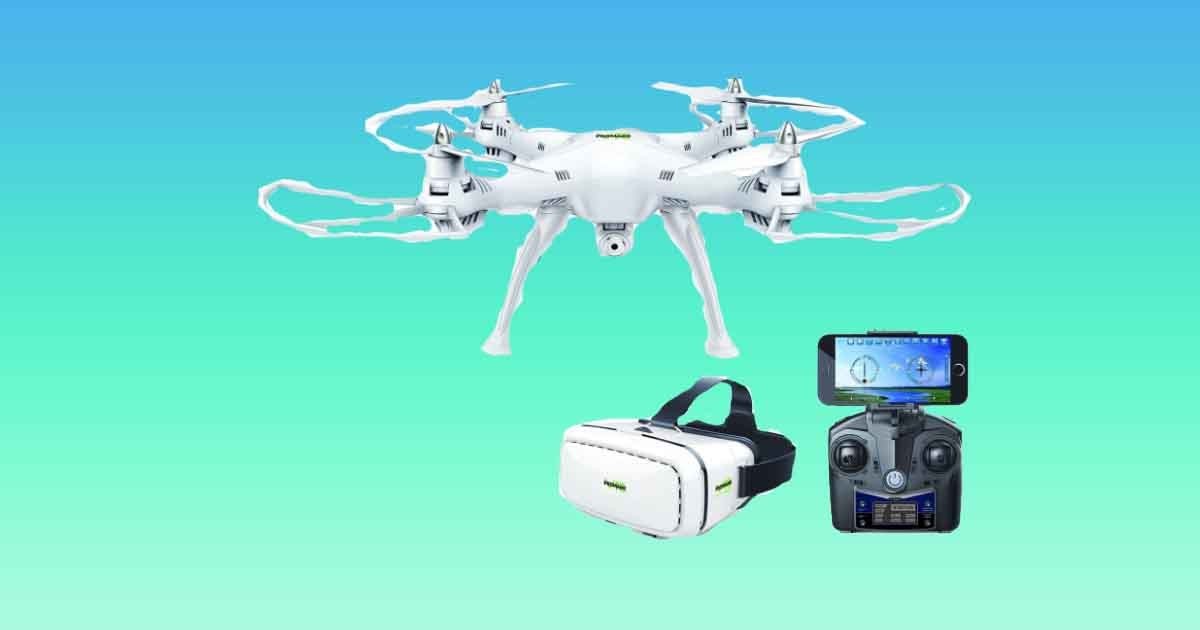 The Promark P70-VR Drone features a modern technology design. The quadcopter is not tiny, has a 19 x 5.8 x 19, and weighs 2.5 pounds. The drone has four rotor blades with lights.

The two green lights are in the front part of the drone, while the two red lights are in the drone’s back part. The drone has long legs that protect the controlling gear and camera when landing. You will find the blades’ protective shields in the packaging, and you will have to attach them by yourself.

The quadcopter has a 720p camera under its body. With the camera button on the controller, you can tilt the camera up or down.

The camera offers a fantastic video quality; according to the P70-VR Drone Reviews, the previous and current owner describe it as reasonably decent.

However, the video might have some jelly effect when you suddenly move the drone. Overall, the picture and video quality of the quadcopter is impressive and satisfactory when it works in a setting with slow speed.

The quadcopter has a powerful battery 7.4V 2000 mAh Lithium-Polymer. The battery will offer you up to 12 minutes of flight time; however, the time depends on the operation and speed of the drone.

Things such as stunts and flips are pretty interesting, but they use a lot of power, reducing flight time. Charging the drone’s battery is relatively straightforward; all you need is a USB cord, and it’s included in the package.

The battery takes up to five hours to fully charge. The quadcopter battery has its particular slot and dedicated slot, and it connects the play system and the plug pretty well.

The drone’s transmitter has a standard design that is ergonomic and allows it to fit in your hands perfectly. The quadcopter has several features, but the transmitter is simple and does not have many buttons.

To rotate control and throttle, you use the left joystick and for directional control, use the right joystick. Other buttons are the camera button, which you long press for recording, and short press to take stills.

The impressive bit of the drone is the LED which allows you to do complex settings. From the LED, you will take pictures and see your current settings and the camera mode.

The slick and ergonomic controller design allows it to fit in your hand correctly, making handling easier. The quadcopter also comes with a free app, which will enable you to control all the drone’s functions from your smartphone.

The quadcopter is powerful enough to fly faster and smoothly but is noisy. The quadcopter offers you three-speed settings; you choose one depending on your experience.

The drone features auto-hover, and it immediately starts when you press the camera button. The Promark P70 VR Drone flight range is up to 300 yards, but it is up to 100 yards when using Wi-Fi. If you fly the drone past its maximum range, it loses signal and lands where it is.

You might need to stop the drone because of varying issues suddenly. It comes with an emergency stop button for this function.

A button press instantly kills the drone power, and the quadcopter automatically falls on the ground. However, note that excessive use of this feature will damage your drone.

Flying the drone can be challenging for both beginners and experienced drone pilots. When the drone is in the air, it is difficult to tell whether the front side is facing the drone’s direction.

It’s because the drone becomes relatively small at a distance. Today manufactures are making drones with inbuilt LED lights that help you know where it’s facing.

But when the sunlight is quite bright, you won’t be able to see the lights. The Promark P70-VR drone removes the stress from you.

The drone has a headless mode that allows you to fly it while facing in any direction. The great thing about the headless mode is that the drone will move in the direction you want it to go.

Today many entry-level drones have this feature. It’s pretty ideal for beginners since it makes drone flying easier and better. To launch either of the functions, you press the corresponding button.

Drones are one of the valuable inventions in modern technology. The Promark P70-VR Drone can perform various functions from recreation, entertainment, and even surveillance.

The different drones come in varying price ranges. The Promark drone is quite affordable, considering the number of features it packs.

The drone has a great camera that takes high-quality pictures and videos. Plus, it has other high features such as headless mode, automatic take-off, and landing.

The quadcopter has a memory card slot that can handle an SD of up 32 GB, which is quite remarkable. It’s another great feature for a drone in such a price range, making it strong.

Most drones in this price mode can only handle SD cards of 1-4 GB, which is small and frustrating to those who love taking pictures and videos.

The Promark is usually sold in different packages; it’s in the premium with virtual reality goggles.

Alternatively, you can buy the virtual reality googles separately. The VR googles make your flight so fun by offering you enjoyable flights that are more immersive.

It’s a cool feature that is mainly found in high-end quadcopters. With the feature, you can surely set up your drone to fly at a certain height for as long as you want. If you use this feature with the follow-me feature, the drone will follow you everywhere you go

For a better flight experience, the drone has a premium virtual reality 3D goggle that gives you the feeling of an actual pilot. You will be able to see the world from a higher plane.

According to the Promark P70-VR Drone reviews, the drone has potent batteries that offer you a flight time of up to 12 minutes which is excellent.

The other factor that makes the drone a favorite is the one-key landing, one-button flip, and headless mode; all these features improve your quadcopters flight experience.

Who Is The Promark P70-VR Drone Ideal For?

A Promark P70-VR drone is an excellent option for beginners who want the essential knowledge to fly a quadcopter with advanced features.

The drone is large and has a decent camera but comes at an affordable price. The virtual reality goggle is outstanding and extra excellent and will add to the beginner’s flight experience.

The drone has a few shortfalls; the Promark P70-VR Drone reviews and customers do complain how the video streaming is cumbersome because of the drone’s weak signal and vulnerability to damage.

Again some complain that the quadcopter has missing parts, which makes its overall cost higher than most entry-level drones.

The camera is not great in fast motion

From the Promark P70-VR Drone reviews, a quadcopter is ideal for any drone enthusiast who wants premium quality and advanced drones. It is also a good option for those that need extra-large drones with decent camera quality and the best settings.

The quadcopter also has a stable GPS and other fancy features like hovering, etc., making it quite enjoyable. The Promark quadcopter takes high-quality pictures and videos, and these make it suitable for commercial purposes.

The drone range is also impressive at 1000 meters which is suitable for professional use. If you are a beginner or professional who needs a drone with superb features or commercial use, then the Promark P70 is the drone.