The UDI U818A is a camera drone best for beginners and novices that want to operate drones at the primary level. The drone comes in perfect shape, and you can fly it as soon as you unpack it.

Drones are fantastic devices, and many photographers use them to capture aerial videos and photos. The UDI camera drone does a perfect job of capturing wonderful and clear pictures.

The drone has excellent features, and this makes it the perfect gift to anyone you love. Therefore let’s take a look at some of the fantastic features of the Force 1 UDI U818A. 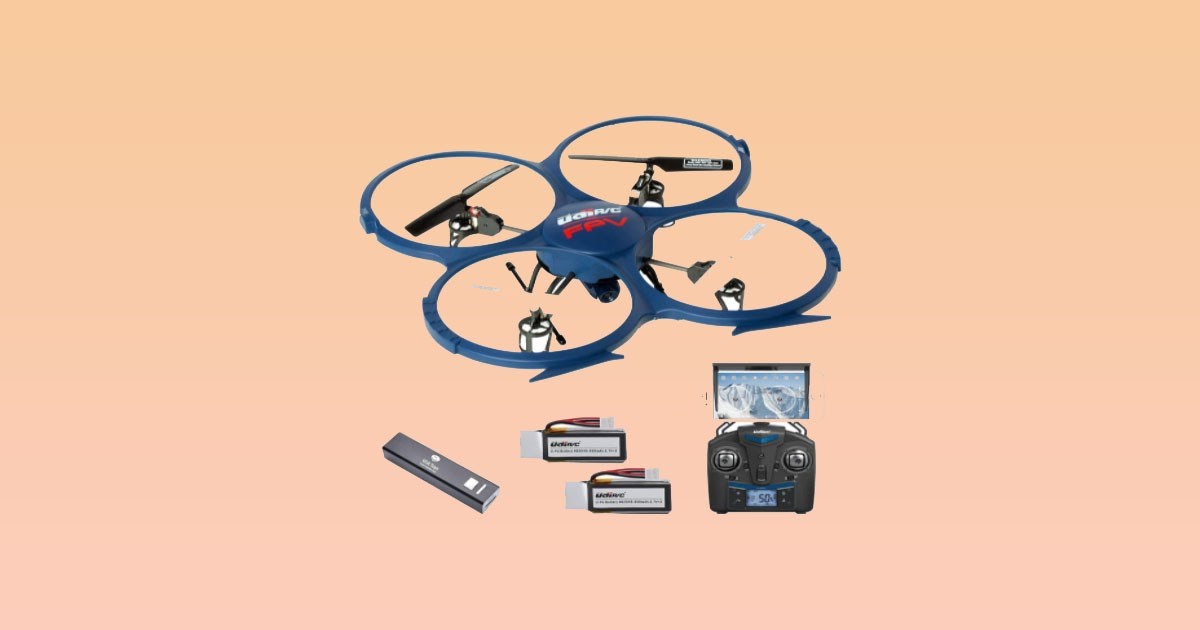 The drone has a great design; and has the famous UDI logo. The Force 1 UDI U818A resembles the UFO from afar, something that many sci-fi fans appreciate.

The drone is lightweight at 2.35 pounds, and this makes it flimsy to touch. The primary material used in making the drone is thin plastic.

The plastic quality is excellent, and it absorbs impact better while saving weight. It has four rotors, two are white, and two are black.

The black propeller guards surround the rotors, making them safer from tangling on objects from the side.

The propeller guards are durable and thus can withstand twisting or pressure making them ideal for kids.  The drone has beautiful LED lights. To turn the LED lights on, press the button located on the shoulder of the remote.

The drone has an extra LED light, which is helpful when you are not in headless mode. The UDI U818A has red lights at the back and blue lights at the front. The lights act as a point of reference and make flying the drone at night easier.

The flight period of the quadcopter is between 7 to 9 minutes when the 500 mAh batteries have a full charge. The flight time is quite average for cheap drones, like the U818A.

The batteries are small but take up to 60 to 120 minutes to fully recharge. You can purchase extra batteries that will help increase the flight time to about 15 to 20 minutes.

The drone won’t be complete and fun to use without the remote control. The remote is made from plastic material and has a simple design. It’s comfortable to hold and will sit perfectly well in your arms.

The remote has several control buttons that allow you to use the drone like a professional. You can put the drone on stunt mode or turn the LED lights on or off using the buttons on the shoulder of the remote.

The controller features two sticks, and their functions are thrust and give direction (that’s left, right, forward and backward). The remote also has an LCD that shows information such as signal, throttle, etc.

Four buttons surround the LCD. The buttons on the left are for taking videos and photos, while the right side buttons are specifically for changing modes.

The camera that faces forward is under the drone, although it’s relatively small. The camera captures pictures with a resolution of 1289 x 960p.

The resolution is satisfactory in places with enough lighting and little movement.

However, the camera does not feature stabilization technology; therefore, the photos might be blurry if you are not keen. In case of too much light, the video can be hazy and unwatchable.

On the downside, the camera only can record video and not audio. The Force1 UDI U818A is not as perfect as other drones brands in the market but considering its price tag, it’s okay.

The remote control has two buttons on the LCD’s left side; you can use them to manipulate the drone. To take photos, you need to use the top button; the bottom button is for videos, and if you want to stop recording, press it again.

The drone’s camera does not have a live feed, but you can easily view the videos and pictures you take. You can connect the drone’s camera to the computer and transfer files. The files are usually in motion JPEG format, and this makes them viewable from most devices.

Once you open the packaging, you can fly the Force1 UDI U818A immediately. The drone comes with rotors already fixed, and you will need to do little preparations.

However, you need to check the battery level first, and to enjoy a longer flight time, the battery needs to have enough power. Checking will also help you confirm that the remote and drone batteries’ AA batteries are in place.

The Force 1 UDI U818A review from those using it say the drone has excellent stability. The drone is great for beginners as well as kids.

The drone has a six-axis gyro that increases its stability, and this guarantees you a smooth flight. The beginners do not have much experience but can better orient by activating the drone’s headless mode.

According to the Force1, UDI U818A review, the drone is perfect for rookies.  For a beginner, it’s not advisable to go for a pretty expensive drone, yet you do not have the right idea about flying it.

The UDI U818A is affordable and has excellent features that can be beneficial to beginners.

The drone is made from high-quality plastic, and this makes it very durable. The drone can surely withstand several falls and crashes, which makes it perfect for rookies.

In the packaging, you will find spare propellers plus a powerful screwdriver. Ideally, you can buy some spare batteries from the market at affordable prices, and they will increase your flight time. It is also possible to detach the propeller guards to allow the propeller to run faster.

Controlling the quadcopter entirely depends on the drone’s pilot skills. If you are a rookie, it’s better to use the drone in an open area and does not have any obstacles like trees. The place needs to have moderate wind.

The drone is lightweight, and if the wind is too strong, it can simply lose its stability. It would help if you started practicing hovering and then landing until you were perfect in handling the drone.

What Makes the UDI U818A stand out?

The drone has many exciting features that make it a favorite. The quadcopter has the 360 degrees eversion maneuver.

It can comfortably flip in the air at an altitude of at least ten to fifteen feet. At this height, you can press the 360 degrees remote button, and it will throttle right after.

Another great feature is the six gyroscopes that offer stabilization. They increase the drone’s stability when the winds are high, given its lightweight.

The Force1 UDI U818A is durable and versatile and is excellent for people learning to fly the drone. The drone is made of high-quality plastic material that makes it durable to withstand damage.

It’s also affordable, making it perfect for beginners who do not wish to break the bank. Its size does not make it the perfect drone for a toy, but the quadcopter is lightweight because its exterior material is thin plastic.

Its camera quality is average, and this allows it to take good videos and images. However, beginners need to know that the drone cannot land automatically, and its landing depends on the user’s abilities.

The quadcopter has a flight period of approximately 7 to 9 minutes when the battery is fully charged. You can buy extra batteries at an affordable price; they will increase the flight time. If you compare the drone to others in the market, it’s worth every cent considering its feature and build quality.

LCD on the remote controller

As mentioned, the Force1 UDI U818A is ideal for those who are learning to fly the drone. With the quadcopter, you will get basic drone flying knowledge. It’s even the perfect drone for kids; you can buy it for your kids’ training.

The drone has typical toys’ unique and straightforward features, but it’s one of the best builds if you consider its camera quality. The drone was released several years ago, and now there are many drones on the market.

Despite many drones, enthusiasts select the drone because of its affordability and its outstanding features. If you need a simple drone that will help you record videos and take photos, then it’s the best quadcopter for you.